What we are doing

In August 2019 we started an Experimental Traffic Order (ETO), a trial which can be in place for up to 18 months, during which time consideration is given to making the order permanent. The ETO restricts some traffic movements at the Hambrook lights. This follows a government directive to improve air quality on this part of the A4174 ring road in the shortest time possible for all road users, including motorists, bus passengers, cyclists and pedestrians.

The ETO removes the:

There are no changes to the direction of travel southbound on the B4058 from Winterbourne.

We understand that these changes make some journeys slightly longer as drivers need to go around the M32 roundabout in order to access the B4058 northbound and/or the ring road from Frenchay. However, reducing the amount of time and number of vehicles that are stationary at the traffic lights will reduce emissions and should improve air quality.

This is a trial and we will not know if the scheme has successfully reduced air pollution and to what level, until all the data has been collected and analysed.

Why we have made these changes

Air pollution is a significant public health issue. Poor air quality has a number of adverse effects on health and is recognised as a contributing factor in the onset of heart disease and cancer. It particularly affects the most vulnerable in society; children and older people and people already suffering from respiratory and cardiovascular conditions.

The UK has legislation to ensure that certain standards of air quality are met to protect health, but in some areas the standards have not been met. The most immediate air quality challenge faced both at a national and local level is to meet the standards for the pollutant nitrogen dioxide (NO2). This type of pollution is largely caused by vehicle emissions, with road traffic contributing about 80% of the NO2 pollution around roads.

A national assessment of local authority roads identified the A4174 ring road between the M32 Junction 1 and the Bromley Heath roundabouts as being above the annual mean limit value for NO2 of 40 μg/m3 (micrograms per cubic metre). We were required by government to assess if there were any actions that could be taken to reduce the high NO2 levels on this section of the ring road to meet the legal limits in the shortest time possible.

Experimental Traffic Orders are subject to a statutory process which allows the public to comment formally and provide feedback. The consultation on this scheme has now closed and we will publish a report of the feedback received in due course .

We will post updates on this page and on our consultation website if there is a decision on making the layout changes permanent, altering them in any way or removing them.

When will you publish the data on air quality you have been collecting since the changes were made?

We are monitoring roadside nitrogen dioxide levels at a number of locations near the Hambrook lights. We will not be able to assess whether the annual limit (40 µg/m3) has been met, which is the specific problem we were directed to address by the Government, until we have collected data for at least 12 months after the changes were made in August 2019. The data will then also need to be finalised in line with government guidance. As soon as we are in a position to make the final data available, we will post updates on this page and on our Facebook and Twitter accounts.

Will more traffic be allowed through the Hambrook lights east to west on the ring road?

The changes are designed to reduce the amount of time vehicles are stationary at the lights, not to increase the overall amount of traffic on the road. More traffic will be able to pass through the junction on the A4174 for a given time period as a consequence of the changes. Movements are being restricted, so some phases of the traffic lights sequencing will be removed.

Is this the same system used for the Bromley Heath Viaduct improvements?

The trial measures now proposed at Hambrook crossroads are in line with the arrangements put in place during the Bromley Heath Viaduct works. As a result of that experience we are confident that there will be traffic flow benefits to the ring road. The aim of the trial is to confirm and quantify the benefits under more usual traffic conditions.

Are any changes being made to the Bromley Heath roundabout traffic lights sequencing?

There are no planned changes to the sequencing at the Bromley Heath roundabout. To do so would attract increased volumes of traffic and undermine the traffic flow benefits being sought.

Will the changes be made permanent?

The Experimental Traffic Order will run for up to 18 months. Variations of the order are possible for the first 12 months of the order, after which consideration will be given to whether the restrictions should be made permanent or not. We will keep people informed of the process and any decisions made during the Experimental Traffic Order period.

Orders are subject to a statutory process which allows the public to comment formally and provide feedback. Visit our consultation website for more information.

Will bus services be affected?

Improvements to traffic flow along the ring road will bring more reliable journey times to the services that pass along this section of the A4174, including the m3 and m3x services. Presently congestion can prevent access to the A4174 westbound bus lane through the crossroads rendering it ineffective. By removing the bus lane for the trial, there is potential to move vehicles more efficiently through the junction and so improve journey times for all westbound traffic, including bus services. Bus services using the B4058 Bristol Road will also be affected by the restrictions.
Routes affected
19/19A Cribbs Causeway to Bath
Y4 Bristol to Yate.

Is this the only location in South Gloucestershire where traffic movements are being restricted to try and improve air quality?

Yes, this is the only scheme of its type we are currently proposing and follows a government directive to improve air quality at this location. We have implemented this scheme with the aim of complying with the annual mean limit value of 40 µg/m3 for the pollutant NO2 in the shortest time possible.

I live near the Hambrook traffic lights - what is the air quality like where i live?

We have been monitoring NO2 levels where people live near this junction for some years. The results show that the levels here are within the national limits for where people live. This is mainly because the houses are set back from the road and pollutant concentrations quickly drop off with increasing distance from the roadside. Additional monitoring has been set up at the roadside for the purposes of the trial to monitor the impact of the traffic restrictions at the junction. Our annual air quality reports, which include the monitoring results, can be found here.

What changes are there for cyclists and pedestrians? 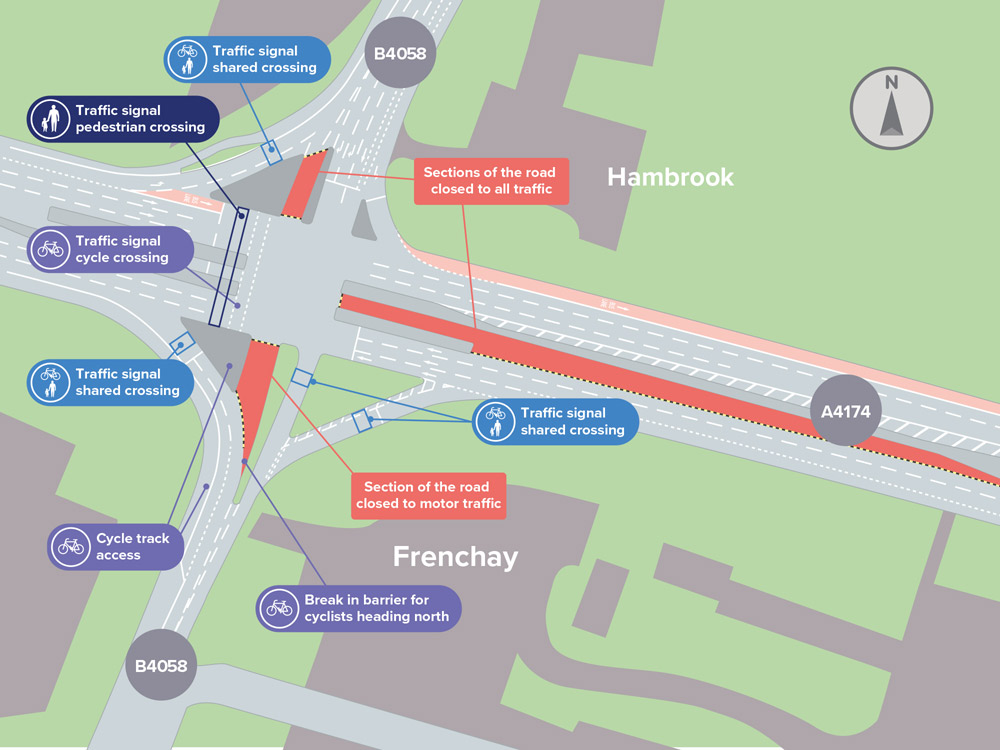 The existing traffic signal controlled crossings for cyclists and pedestrians will not change throughout the trial. Cyclists will have direct access to the triangular island through the new barrier if you are approaching on the Bristol Road from Frenchay direction only.

With that one exception, the short sections of road through the traffic islands will be blocked off to everyone. When cycling north you will not be able to use those sections to go right across in one go on the road from Frenchay. You are expected to use the crossing from the triangular island for safety reasons, as it would be unsafe to join the left turn from the A4174 ring road towards Winterbourne.

Will traffic tail back from the motorway?

We are working with Highways England which manages the M32 motorway including the set of traffic signals at the top of the entry slip road. Those traffic signals control peak period ‘ramp metering’ which holds traffic back from joining the motorway and it has been agreed this system will not be used during our trial.

By suspending the ring road bus lane there is extra space created for other vehicles to occupy and this will help reduce congestion.

Is this trial because of the new development at Frenchay hospital and elsewhere?

Although additional traffic is generated by local development, this section of road is affected by traffic from a much wider area and is a very important link to the motorway network. Increased demand for use of this road reflects the general growth and prosperity of our region. Whilst new vehicle emissions are improving all the time, the increasing number of journeys being made is undermining the rate of improvement that might be seen here.

Beta This is our beta website, your feedback can help us improve it.